One by one, environmental experts took turns forecasting a grim future for theMENA region’s vanishing supply of water resources during the Fifth Environmental Symposium of the German-Arab Scientific Forum for Environmental Studies, which was held at LAU Byblos from September 20-21.

Through presentations of numerous case studies and research, the event revealed how global warming and the region’s rapidly increasing population are stretching the water supplies alarmingly thin.

“If there is a global solution to the water crisis, it may be a bit late for the Middle East,” says Dr. Fuad Hashwa, a professor at LAU’s Department of Natural Sciences and dean of the School of Arts and Sciences in Byblos. The school co-organized the event with the German-Arab Scientific Forum for Environmental Studies e.V.

“Lebanon is fortunate to have more water resources than neighboring countries, but we still need to have a responsible attitude to water and better management of the resources,” says Hashwa. 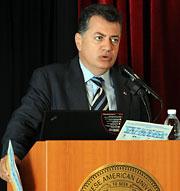 “Arabs cannot afford to waste a single drop of water,” said Najib Saab, secretary general of the Arab Forum for Environment and Development, at the symposium’s opening.

Saab revealed the finding of his organization’s upcoming report, which predicts that by as early as 2015 Arabs will face an annual per capita water share of less than 500 cubic meters — less than one-tenth of the world average.

“The state of water resources in the Arab world is precarious and worsening,” he added. “Water scarcity is perhaps the most serious challenge facing the region in the coming decades, and without concerted efforts at improving water management and institutions, the situation will only deteriorate further.”

Ralf Klingbeil, the regional adviser for environment and water at UN’s Economic and Social Commission for Western Asia, cited a recent World Bank study, according to which the MENA region has the least freshwater resources per capita in the world that continue to decrease with the region’s high rate of population growth.

“We don’t really have a clear exit strategy,” said Klingbeil. “We’re using these [water] resources like we’re mining oil, gas or other resources, but we don’t know what we’re going to do when the water is gone.”

Referring to the consequences of water shortages in the region, Klingbeil cited a July 2010 report by the International Organization for Migration that identified water as a main cause for the widespread population displacement in Iraq.

Dr. Talal Darwish, a researcher from the Lebanese National Council for Scientific Research, revealed land degradation and forest fires as consequences of the water crisis.

“One of the most devastating symptoms of climate change is climatic extremes,” he said, adding that 57 percent of Lebanon was in severe drought condition in May 2010.

What can be done to improve the situation?

Dr. Fathi Zereini, chairman of the German-Arab Scientific Forum for Environmental Studies e.V., called for more efficient use of the existing water supplies, the development and adoption of new technologies, a wide public awareness campaign, a reduction of green house gas emissions, and the improvement of air quality as means to reverse the grim water trends.

“Seventy percent of water [in the MENA] is used for agriculture,” he said. “This is not sensible. A change of thinking is needed in this respect. The problem can only be dealt with effectively if we work together, and use our scientific advances and technical know-how.”

Fadi Comair, the general director of Hydraulic and Electric Resources at the Lebanese Ministry of Energy and Water, said the government has put forth an ambitious scientific and management program to deal with the water crisis, but warned that both the technical and policy aspects of the plan must work in order for it to succeed.

“The first challenge is that of governance,” Comair explained. “If we succeed on the technical side … and we lose on the governance side, we won’t be able to adapt ourselves to the global changes [needed to address the problem] in the MENA region.”

Environmental scientists from the Middle East, North Africa and Germany will examine the impact of global warming on water resources in theMENA region, during the Fifth Environmental Symposium of the German-Arab Scientific Forum for Environmental Studies to be hosted at LAU Byblos from September 20-21.

The symposium aims to encourage and enhance the exchange of experiences and cooperation among German and Arab scientists; politicians; representatives of universities, institutions and industry; and the wider public about the different aspects of the event’s theme. It also intends to contribute to environmental protection and to understanding among nations.

Presentations will fall under four categories over the two days: the impact of global warming on water resources; water resources, protection and management; air and soils pollution and protection; and wastewater treatments and reuse. The conference program (PDF, 368 KB) will also include poster presentations.

Following the conference, participants will be invited to take part in a series of field trips to acquaint them with Lebanon’s water resources and to promote cultural exchange. The trips are planned for Jeita Grotto, the Bekaa Valley and North Lebanon on September 22, 23 and 24, respectively.

The biannual event is co-organized by LAU’s School of Arts and Sciences in Byblos and the German-Arab Scientific Forum for Environmental Studies e.V., in collaboration with the Department of Engineering, Geology and Hydrology at RWTH Aachen University, Germany, and the Institute for Atmospheric and Environmental Sciences at J.W. Goethe-University in Frankfurt, Germany.

This year will be the first time Lebanon hosts the symposium, previous editions of which were held in Germany, Jordan and Morocco.

Contact information about the symposium organizers is found on this page.