To address the growing resistance of bacteria to antibiotic medication, more than 120 medical doctors and scientific researchers from across the Middle East and North Africa, the United Kingdom, Germany, India and Pakistan gathered at LAU Byblos on November 8 for the final day of the 7th Arab Conference for Antimicrobial Agents held this year in Lebanon. 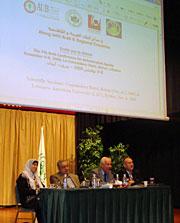 The three-day conference was organized by the Arab Alliance for the Prudent Use of Antimicrobials, a member of the International Society of Chemotherapy, and was held in collaboration with the World Health Organization under the patronage of the Lebanese Ministry of Health. It kicked off November 6 at the Commodore Hotel in Beirut, before moving to LAU where it was hosted by the School of Arts and Sciences in Byblos.

“Through this conference, we aim to serve the community by stressing the importance of the prudent use of antibiotics against pathogenic bacteria because of the increased resistance of these microorganisms to commonly used antibiotics,” said Dr. Fuad Hashwa, dean of LAU’s School of Arts and Sciences in Byblos, during the opening session at LAU.

Several researchers from LAU participated in the conference including Dr. Tarek Na’was, LAU Dean of Students in Beirut and an associate professor of microbiology, who was a member of the conference organizing committee and presented a research paper about characterization and antimicrobial resistance of the Haemophilus spp. bacteria.

Two other LAU participants were Dr. Sima Tokajian, LAU assistant professor of molecular microbiology, who presented her research on some molecular typing methods, and Dr. Roy Khalaf, assistant professor specialized in yeast genetics, who lectured on the characterization of a cell wall protein in the Candida albicans fungus.

Maya Farah, senior science lab technician in Byblos and LAU graduate with an M.S. in molecular biology, helped organize the LAU sessions with other LAU faculty, staff and students from the molecular biology graduate program. She says the core problems that have helped cause the growth of resistance in certain types of bacteria and led to the need for such a conference have been doctors who do not prescribe proper antibiotics and patients who stop using antibiotics prematurely.

“When a patient with a bacterial infection doesn’t complete the full dosage of the prescribed antibiotic, those bacteria will most likely develop resistance to that drug — a phenomenon that bacteria are capable of transmitting among themselves hence causing the failure of subsequent similar treatments,” Farah explains.

Other hot topics discussed at the conference included the H1N1 pandemic and recent advances in communicable diseases.

The conference concluded with some remarks by Dr. Asem Shehabi,ArAPUA vice president, who emphasized the importance of institutions to collaborate on research. He announced that his organization would secure funds for joint research projects with enticing proposals.

The Arab Conference for Antimicrobial Agents is held in a different location each year. It was hosted in Morocco last year and in Jordan in 2007.