The Communication Arts Department at the Lebanese American University celebrated this week its 46th anniversary. The celebration that took place Friday Saturday January 22 at LAU’s Beirut campus included a symbolic change in leadership ceremony. Associate Professor Jad Melki, who joined LAU this month, was appointed chairperson of the department as of January 15. In his inaugural speech, Dr. Jad Melki thanked former chairperson Dr. Mona Knio for her selfless, committed, and passionate leadership of the department. Melki, the founding director of Media Studies at the American University of Beirut and a former broadcast and digital journalist, said it has been a long term dream of his to study and teach at LAU’s flagship program. Melki said the “Communication Arts at LAU has been the preeminent communication program in Lebanon and it has the potential to be the number one program in the Arab region and among the top 100 globally.” He believes with the help of the department faculty and staff and the support of the university administration this goal can be achieved by the department’s 50th anniversary in 2020. Dr. Nashat Mansour, dean of the School of Arts and Sciences welcomed the new department leadership, which includes Associate Chairperson Dr. Nadra Assaf, and thanked Dr. Knio for her many years of service at LAU. Dean Mansour confirmed his support for the department and its leadership and congratulated Melki on the new position. Melki, a graduate of the University of Maryland and a former faculty of the John Hopkins University is keen on expanding the department’s curriculum, elevating its international profiles, and strengthening its research and creative output. The communication arts at LAU offers degrees and emphases in Film/TV, multimedia journalism, communication studies, and the performing arts, including theater, dance, and music. The department plans to roll out new undergraduate and graduate degrees and to offer new exchange and study abroad programs in the coming few months. “ 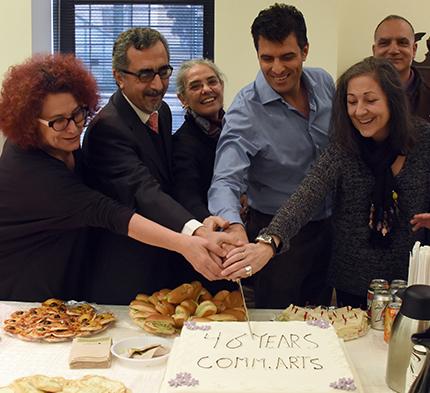