“The political impact of the Internet should not be exaggerated”

The Internet has no doubt been revolutionary, but, say an increasing number of observers and academics, it has not been the instigator of recent protest movements, despite many having been labeled “Facebook revolutions.”

While Internet-based platforms and technologies have certainly provided powerful resources for activists, Tamirace Fakhoury, associate director of LAU’s Institute for Social Justice and Conflict Resolution, says the euphoria around Internet activism has died down. “In assessing the outcomes of activist platforms, I agree with sociologist Manuel Castell. You can’t perceive Internet activism as a finality in itself. You need boots on the ground,” she specifies. 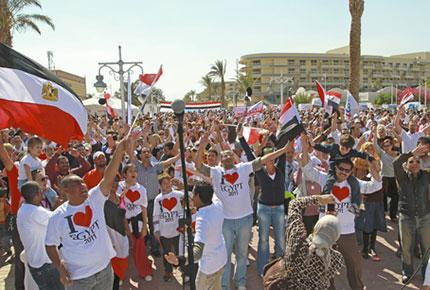 In December 2011, thousands of people took to the streets across Tunisia to demand an end to the 21-year rule of Zine el-Abdine Ben Ali. In the immediate aftermath of the fall of his regime on January 14,  2011, newspapers and magazines the world over were writing about “the first Wikileaks revolution.” The whistleblower website had, starting the previous November, been publishing memos and cables written by the U.S. embassy in Tunisia that detailed prevalent corruption within the regime.

“Certainly you can see Wikileaks as a catalyst to the uprising, but it was only one of many. By now many academics have shown that grievances did not break out in 2010, they had been building up,” says Fakhoury, noting that Wikileaks was one of a number of platforms that enabled information and grievances to become accessible to the broader public.

“Internet technologies are a valuable resource in connecting people and providing platform for coordinating, and are currently part of most activists’ repertoires,” adds Fakhoury, who has for four years taught a summer semester course on media and global protest movements at the University of California-Berkeley. “However, these repertoires change over time depending on technology. It used to be the radio; now the Internet is an instrument of innovation; in the future it may be something else that is not Internet based.”

Despite its usefulness, the Internet also has a number of drawbacks. It can and has been used by dictatorial regimes to track and entrap activists. What is more, it has also been used by said regimes and their supporters in much the same way as activists have used it, to promote their own agendas.

“Online platforms invariably disperse the voice of a movement and present sentiments that are made on the spot, whereas successful movements rely on strong synergies and research and strategy,” adds Fakhoury, who recently conducted a related study of the Occupy Wall Street movement.

The garbage crisis in Lebanon, she says, is a case in point. “It revealed how much we need well prepared strategies and a way of action that isn’t based on the heat of the moment or online sentiment that is enthusiastic, angry or full of resentment.”

Despite this, Fakhoury was at first surprised to learn that a survey completed recently by faculty at the Adnan Kassar School of Business revealed that 65 percent of youth in Lebanon have never visited a blog or website related to activism or human rights. “Looking at postwar social fatigue in Lebanon may explain it. People don’t believe anything is possible. Youth show a great deal of skepticism and are disenchanted.”

Might the Internet spur them toward change or even revolution? “The political impact of the Internet should not be exaggerated,” concludes Fakhoury. “Far more important to the success of a movement is the ability of activists to effectively use the Internet, their programs, continuity in their political platform and the ideas they propose, and their interactions with the political system and the international community. These are the factors that have been proven to be of most importance.”