For the fourth year in a row, the department of English in the School of Arts and Sciences organized the Haas Mroue creative writing competition, which provides an opportunity for undergraduate students to submit short stories, poems, and essays relating to a specific theme.

This year, the topic focused on the notion of happiness and what the road to happiness could entail. The organizing committee, which includes Ms. Samira Shami, Mr. Shadi Shedrawi, Dr. Rula Diab, and Ms. Paula Habr, selected a theme that would be more optimistic and cheerful. The students’ responses, though, discussed the journey to happiness, but with a tone that was both optimistic at times while resorting to a critique of the journey as well.

Ahmad Mahdi, a participating student majoring in Biology, expressed his appreciation for such activities, which allow students to share their ideas. He had also participated in last year’s competition.

The committee announced the winners for both categories: Zeinabelbatoul Sbeity and Christian Chadd, for the essay and short story respectively. Winners received a certificate and a voucher for Antoine Bookstores. All participants also received recognition and were invited to share their writing with the attendees. They were also given a personal copy of Haas Mroue’s poetry.

Zeinab Elbatoul Sbeity, who won 1st prize in the essay category, appreciated the opportunity to express herself. While reading from her winning essay, she described happiness as “delving into the ‘why’s and ‘how’s to try in vain to quench our eternal curiosity.” She went on to illustrate the happiness felt when reaching a successful outcome, all from the perspective of her biology major, probing into scientific concepts. 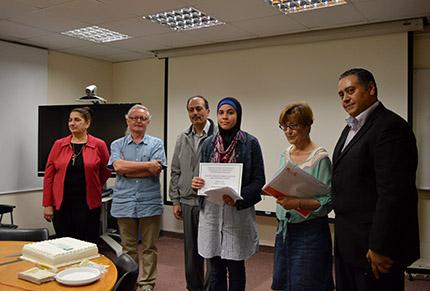 And to quote Gibran Khalil Gibran, “happiness is a vine that takes root and grows within the heart, never outside it.” Here’s to hoping that the love of language and literature continues to take root all around us. 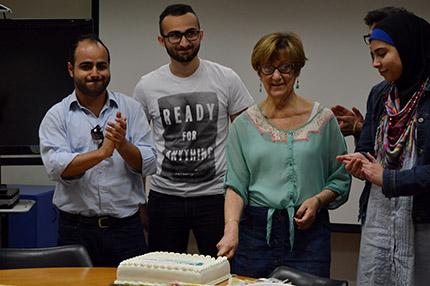