The Mathematics Program at the Lebanese American University was honored to be represented in the Summer MathFest, an international annual meeting of the Mathematical Association of America (MAA) that was held in August 2016 in Columbus Ohio, through a research conducted by its innovative students.

The research - which was supervised by Dr. Samer Habre, Professor of Mathematics at LAU and the Associate Chair of the Computer Science and Mathematics department (CSM) - was conducted by several undergraduate math students: Lara Kassab, Rami Masri and Rony Bou Rouphail. It “was in the field discrete dynamical systems. In particular, the work focused on studying the equilibrium point of 2x2 linear iterative systems,” specifies Kassab. Research is very significant for undergraduate students especially when applying for graduate schools in the United States of America, a point iterated by Habre and Dr. Leila Issa, Assistant Professor of Mathematics who reassures that “research trains students to think independently and out of the box, which is an invaluable skill to develop, whether they pursue graduate studies or not.” “Conducting research is unlike anything you can learn in a course or from someone. It shows enthusiasm to learn and work on new ideas in mathematics; it shows as well patience and determination which are qualities of a good researcher willing to work and serve the mathematical community,” assures Kassab. Moreover, Dr. Issa states that students are encouraged to participate in researches by providing them with incentives to travel and join conferences. 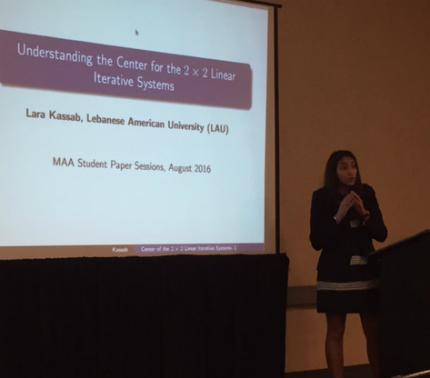 This research is only a sample of the vast opportunities provided by the Department of Computer Science and Mathematics. Other opportunities include offering and encouraging numerous minors such as Actuarial Science, Computer Science, and economics. Unlike the mainstream perception that Math graduates are deemed to become either school teachers or university professors, Habre assures that Math graduates can also work in the Banking field as well as in the insurance industry. The minor in actuarial science for instance “uses mathematics to assess insurance policies. It requires a lot of knowledge in probability and many other mathematical techniques,” says Leya Shaer, an undergraduate Math student pursuing it. Hence it opens up the opportunities to students to work in the insurance industry. “I saw it as an application of math in the real world and as a combination between math and business. It benefits me with my major because it extends my knowledge to more than theoretical mathematics,” states Shaer who passed the first P (probability) exam in actuarial sciences. However, according to her, it is not enough to pass this exam, because there are several successive exams she needs to pass as well.

However, Ghina Abdul Baki, an undergraduate Math student shifted her minor from actuarial sciences to economics after taking two economic courses required for her minor in actuarial sciences. She specifies that “at first, I thought that minoring in economics won’t be very useful; I thought that it is just a “small dream” or a plus that I can add on my CV. Nevertheless, my prejudgments failed because that “small dream” is actually a golden key that has unlocked the doors of many fruitful educational adventures,” since this minor offered her hands-on experience to how mathematics is applied in our daily lives. Abdul Baki expresses her satisfaction with the opportunities provided by LAU and declares that the university “has successfully established, through minors, the bridge that permits students to travel between different fields.”

As for those seeking a teaching career, Habre advises students to pursue a minor in computer science as many schools are providing basic computing classes for their students and “who’s better to teach those classes than Math graduates?!”To enhance its students’ accessibility to the mathematical community, LAU has recently subscribed to the Mathematical Association of America (MAA) which, according to Dr. May Hamdan, an Associate Professor of Mathematics and the membership administrator, is a very good step for the students. Through this membership, all registered students will have access to numerous online publications of the MAA, such as The American Mathematical Monthly, The College Mathematics Journal, Mathematics Magazine, Math Horizons, and MAA FOCUS. 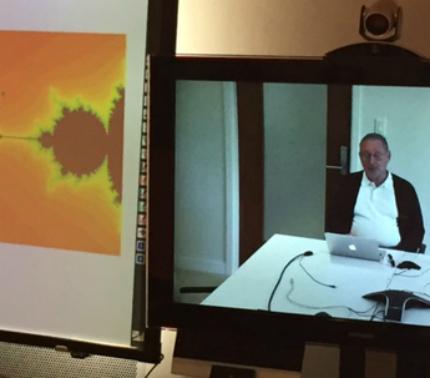 Hamdan is also the head of the Mathematics Club at LAU which engages students in interesting activities. Dr. Hamdan affirms that “this is the second year in which the club is active,”  conducting a series of events that range from seminars, to fun activities such as placing a wheel of activities next to the cafeteria to make LAU students aware of the existence of the Math club. Dr. Habre asserts that the lectures organized by the Math Club have had a great impact on the students due to the caliber of the invitees that ranged from a local mathematician turned into a successful business man (Mr. Dani Azzi), to a world famous Mathematicians (Dr. Robert Devaney) whose lecture was broadcast live from the LAU New York Academic Center.

Habre demonstrates his satisfaction with the Math class of 2017 since this is the first time that LAU hosts a full quorum in Mathematics classes. This confirms the students’ arising interest with the program at LAU. In that regard, Habre adds, “we are very happy not only with the number of students but with the caliber of students we are attracting compared to other programs in other universities that are much more established.” Furthermore, LAU will be launching its MS degree in Applied and Computational Mathematics (ACM) next Fall 2017.  First brought up in 2007 by Dr.  Haidar Harmamani - the former chair of the department - the idea was then formally discussed in 2009, when “Drs. Haidar Harmanani (Chair of CSM-Byblos) and Samer Habre (Chair of CSM-Beirut) formed in November 2009 an Ad-Hoc Committee composed of Dr. May Hamdan, Dr. Rony Touma, and myself to work on drafting a proposal for the MS,” states Dr. Chady Nour, an Associate Professor of Mathematics on the Byblos campus.

Dr. Rony Touma, Associate Professor of Mathematics on the Beirut campus, asserts that “the proposal for the ACM program was approved by New York’s State Education Department in September 2016.”

The MS program will definitely “offer many prospects for its graduates including pursuing Ph.D. studies in Applied Mathematics (or other related fields) and jobs in academia, industry, and high-tech start-ups and research labs locally, regionally, and abroad,” continues Nour, as it is going to be the only MS program in Lebanon teaching Nonsmooth Analysis, a modern branch in the study of Mathematics which “refers to a differential analysis in the absence of differentiability.” “We are currently working on plans for hiring graduate students, advertising the program, finding scholarships to help support outstanding students,” assures Touma.

A study conducted two years ago demonstrates that 67% of the surveyed students were interested in the program.

To conclude, the Mathematics program is flourishing on a continuous basis and the students are the ultimate benefiters of its increasing prosperity.