“The Only Way to Predict the Future is to Invent It” 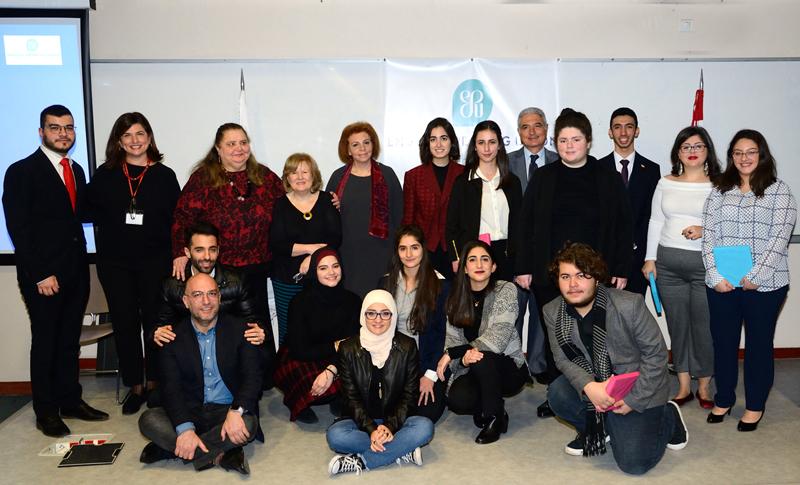 Comedian Jerry Seinfeld once said, “According to most studies, people’s number-one fear is public speaking. Number two is death.” Yet that did not stop 12 brave souls from eight Lebanese universities, including LAU, from participating in the 18th annual National Public Speaking competition hosted by the Department of English in collaboration with the Lebanon branch of the English-Speaking Union (ESU) January 14 on Beirut campus.

This year’s theme was “The Only Way to Predict the Future is to Invent It.”

This year’s winner, AUB Economics and Political Science major Kamel Wehbe, will compete at the ESU public speaking competition in London this coming May.

LAU has become a hub for the ESU competition, which it has been hosting for the past 13 years. Indeed, the competition has become part of the department’s outreach and civic engagement program.

“This is a very good platform for students to be exposed to voicing their opinion without being judged about what stand they take. They feel free, there are no penalties,” said organizer and Assistant Professor of Oral Communication and English Nabelah Haraty.

“Students compete positively, not negatively. They all have empathy for each other. It also encourages them to speak in English,” she added.

Co-organizer and English Instructor Mona Shahine said that students are becoming more aware of the competition and are practicing very hard. “You can see they are in it wholeheartedly. There is passion. They want their voice to be heard, and this is what we want – for the youth to voice their opinion,” she said.

For Wehbe, the competition provided a platform for his impassioned speech “Defying Reality,” on the need to reform the educational system in Lebanon to empower the youth. He argued that the only way for Lebanon’s youth to invent the future is through “a holistic, affordable and experiential education.”

He linked the limitations of education to “our cynicism toward politics.”

“If a person feels he’s in a country where he has rights and the ability to change things, that will complement both his education and his ambitions,” said Wehbe, who was nominated by the English Department at AUB. “So, if we don’t have this free-flowing political structure that isn’t so terribly hinged on old beliefs, how do you expect the new generation to ascend with new ambitions and plans for Lebanon?”

LAU’s Department of English also hosted an in-house public-speaking competition on January 11, in which nine contestants from LAU participated. The winners were Political Science and International Affairs majors Christelle Barakat and Joya Fadel.

“The topic is something that I am passionate about. I wanted to communicate it to others in the hope that they would take something home with them,” said Barakat whose speech “MDGs and SDGs: The Future Is Now” tackled the UN’s Millennium and Sustainable Development Goals.

Fadel, in her speech “Head in a Cloud, Feet on the Ground,” highlighted the need to remain realistic in life. “You have positive things, but life will throw negative things at you that you cannot control. I wanted to show both sides of the story.”