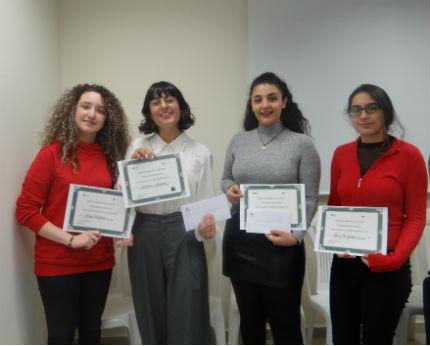 The Department of English organized its 7th Annual Creative Writing Competition for LAU students in which four winners were selected from among 11 contestants.

“Without doubt, students at LAU who participated in the creative writing competition have sparked a new and creative contribution,” Shidrawi said.

He commended the participants for appealing to “our inner most concerns and have proven that you are excellent and avid readers of novels and literature, and as a result excellent creative writers.”

Participants were asked to submit short stories and essays based two topics: Home Matters in Uncertain Times – Recount a Recent Influential Experience; or Imagine that You Had the Choice to Live in a Parallel Universe – Take Us There. The jury consisted of Shami, Shidrawi, Habre and Hajj.

English and Arabic Literature Major Salma Yassine won first place for her short story “The Watered Cactus” in which the writer depicts a young woman’s recollection of relationships in a parallel world.

“The recollections were in a succession of subtle yet compelling and moving, carefully crafted images, whose artistry stood out to the jury from the onset,” Hajj said.

The second place winner was Political Science student Magdalena Al Mwaka for her short story “There and Not There” about a young adult’s insight into the experience of displacement and emigration.

Third place went to two participants English Literature Major Vicky Panossian for her story “Firefly” and Biology student Sara El Koussa for her story “Thrae.” Panossian, who is minoring in history and psychology, relayed a recent tragedy that took place in North Lebanon –a father’s self-immolation.

El Koussa was commended by Hajj for her emphasis on environmental matters in a post-apocalyptic world.

Hajj said that this year’s submissions were evaluated “on a rubric derived from the criteria that are normally applicable in international short story competitions.”

The papers were graded based on dialogue, setting, plot character, syntax and punctuation, subtlety of approach including individuality, originality and imagination, and publishable potential.

“We had a really high caliber of submissions this year, which made the decision-making process even more difficult,” Hajj said.

At the end of the event, the winners received certificates of participation and awards from Dr. Daher.