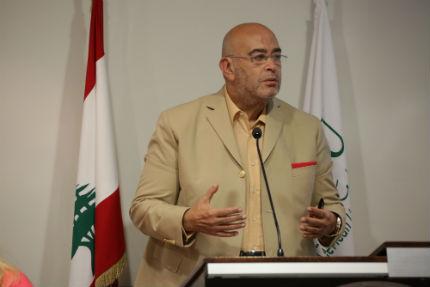 The event was organized by Assistant Professor of Oral Communication Nabelah Haraty as part of her course at the Department of Communication Arts.

Adeeb began his talk by outlining the history of public speaking and the evolution of the concept of communication.

Starting in 2500 BC in ancient Greece, the Athens arena was a platform to spread ideas, hold public debates, and make announcements to reach the masses.

“For one person to succeed he needed to control the highest number of people, which is the idea of how to influence, and the idea of mobilizing the masses by sending a message, from a sender to a receiver,” thus emphasizing the importance of oral communication.

With time, the rules of communication developed and became more sophisticated, evolving to message, medium, communicator, audience and message effect.

“The last point was always ignored, and this is where the Arab world failed with the idea of lobbying internationally, because we do not assess the degree of message effect.”

However, the greatest value of communication, and the ultimate reason why we communicate is “to influence each other, to listen to each other, and to learn from one another.”

“But all of this means nothing, if you are afraid,” he said, describing fear as the biggest inhibitor to attaining the truth.

Students graduating in political science or media and are looking for the comfort of a 9-5 job, are advised to work in a bank, he said, because working in journalism and being professional speakers is much more than that.

“When you have graduated, do you want a career? Or do you have a mission? If you enter the field of media and journalism, your job is to reform awareness,” he said.

Yet, Adeeb said the world is living in the “era of fake news”, blaming its prevalence to lack of professionalism, negligence and absence of due diligence in news coverage.

“We have become slaves. Now it is the technological oppression,” he said, stressing the importance of fact-checking, interviewing eyewitnesses and primary sources when reporting news.

Moreover, a viewer or a listener must always seek to form an informed opinion by referring to multiple sources and coverages of a single story or event.

Yet, Adeeb, who is accustomed to being in the spotlight, said the idea of overcoming fear and being outspoken also presents a constant struggle for him.

“I am afraid, because I am human. It is a constant conflict between protecting myself and my family and between respecting my conscience. Sometimes you go one way sometimes the other,” he said.

The lecture was followed by a Q&A session regarding communication and future challenges.

At the end of the lecture, Dr. Haraty presented Adeeb with a commemorative present from LAU.