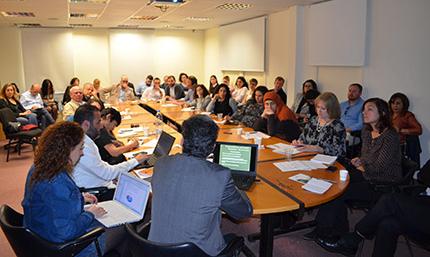 The Institute for Social Justice and Conflict Resolution (ISJCR) at the Lebanese American University, the UNESCO’s International Centre for Human Sciences (CISH) and International Alert (IA) are hosting a second roundtable on Syrian Refugees’ Access to Justice.

The roundtable takes place in the framework of a joint project implemented by CISH, International Alert and LAU on Syrian Refugees’ Justice Concerns and Access to Formal and Informal Justice Systems in Lebanon. The Consortium’s researchers will present key findings on the perceptions and practices of seeking justice from their qualitative and quantitative research on Syrian refugees’ recourse justice in Lebanon.

The roundtable will be followed by a workshop on the formal and informal justice mechanisms that displaced Syrians draw on. The workshop will result in a conceptual model for understanding the role of different actors in providing or facilitating access to justice for refugees.

Click here for more information about the event and the program.

You can read more about this roundtable in L’Orient le Jour here, in the National News Agency here, and on the LAU webpage here.