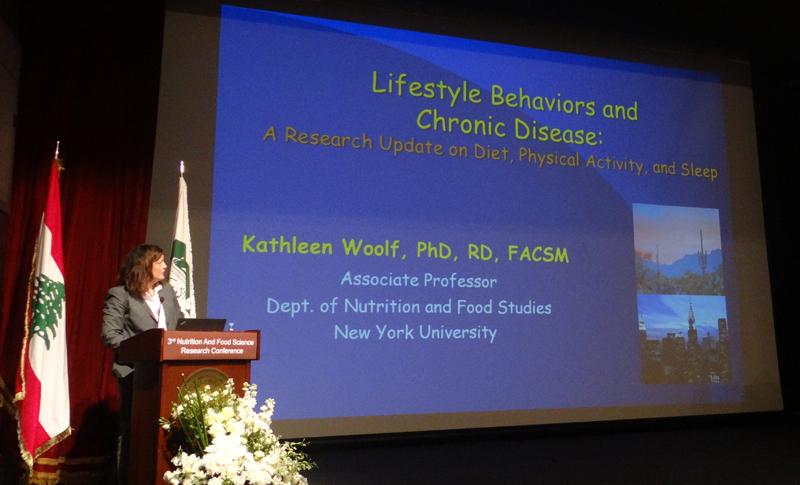 Speakers presented the most recent research in the fields of nutrition and food science, especially in light of a dramatic increase in non-communicable diseases (NCDs) in Lebanon and the region due to poor dietary habits.

In his address, Dean of the School of Arts and Sciences Nashat Mansour said that one of the conference’s objectives was to “address challenges in Lebanon and the region, in particular the challenges of non-communicable diseases, child obesity, and food safety. I believe that the themes of this conference are timely if not critical.”

Mansour also announced the Fall 2018 launch of the MS in Nutrition program, which “has a wonderful mix of theory and practice, and a research thesis that will be the culmination of the receiving courses.”

The conference’s two keynote speakers were Kathleen Woolf, director of the PhD in Nutrition Program at New York University, and Juana Willumsen, senior officer at the Department for the Prevention of Non-Communicable Diseases at the World Health Organization. Among the main guests was Rola Atweh, representing the conference’s academic co-sponsor the National Council for Scientific Research (CRNS).

Principal organizer and Assistant Professor of Nutrition Lama Mattar said that she had invited Woolf and Willumsen to give the conference a broader spectrum. “The two speakers complemented each other very well thanks to their different backgrounds,” Mattar said.

Willumsen also spoke during a panel discussion on nutritional policy in Lebanon alongside Mohammad Sandid, president of the International Diabetes Federation in Lebanon; Joyce Haddad, the head of Disease Prevention at the Ministry of Public Health; and Chaza Akik of the American University of Beirut’s (AUB) Center for Research on Population and Health. Rana Saleh of AUB’s Knowledge to Policy Center acted as the panel facilitator.

Over the course of the day, presentations covered an array of topics, including cardiovascular diseases and nutrition in Lebanon; dietary implications of household food waste in urban areas; food security of Syrian refugees in Lebanon; and behavioral patterns behind the high mortality rate caused by NCDs.

Woolf’s presentation focused on the association between NCDs and diet, physical inactivity and short sleep duration – the latter having become a “hot topic” in research, she noted.

“The Arab countries have been experiencing one of the greatest shifts going from infectious diseases to more NCDs,” she told the audience.

Presenter Lara Nasreddine of AUB underlined that point, saying that the rate of deaths attributed to NCDs in the eastern Mediterranean “is close to 53 percent. Lebanon has the highest in the region, with 84 percent of deaths in the country attributed to NCDs.” Cardiovascular diseases are “the main contributor to these deaths, at 45 percent of mortality in the country,” she added.

Nutritionists in the audience were eager to follow up on the data presented at the conference. “We lack data, and we always have to refer to data from outside Lebanon,” said Hoda Yassin, coordinator of the Nutrition Department at Bahman Hospital. “We need such conferences.”

The event was also a meeting point for experts in academia, NGOs and the Ministry of Public health to explore collaboration opportunities, and “to ultimately work toward the implementation of this research through interventions and so on,” Mattar noted.

For nutrition graduate Rayan Chourbaji, LAU “is constantly updating knowledge in the field. It’s very nice because the conference includes several topics, and is not limited to a single area.”

Nutrition clinic owner Mona Hijazi was grateful the conference allowed access to the studies presented. “It is important for us in Lebanon, for example, to know the percentage of people who suffer from cardiovascular disease and diabetes, and how many moms breastfeed.”

The conference concluded with a competition for the best poster presented by students from universities across Lebanon.